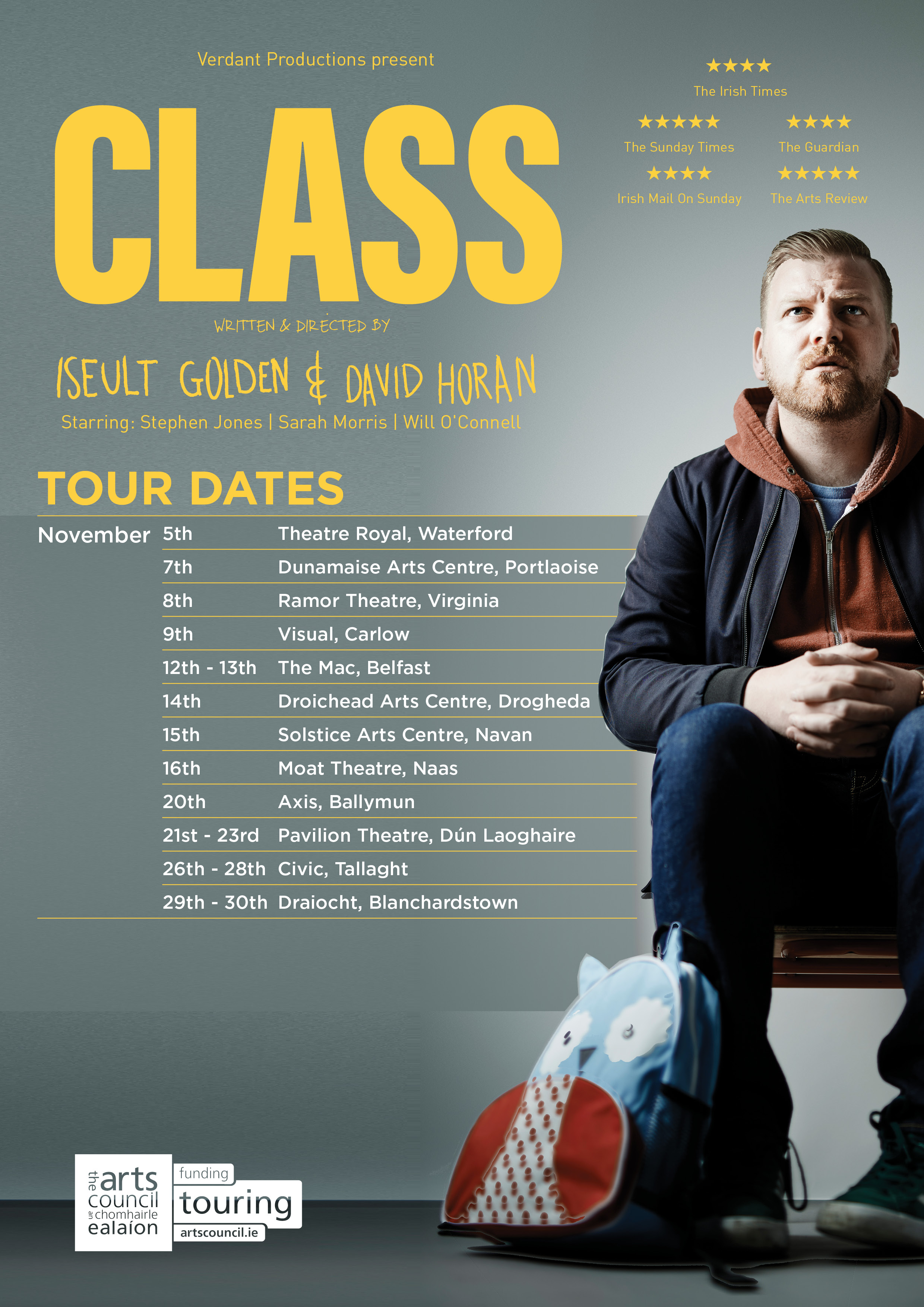 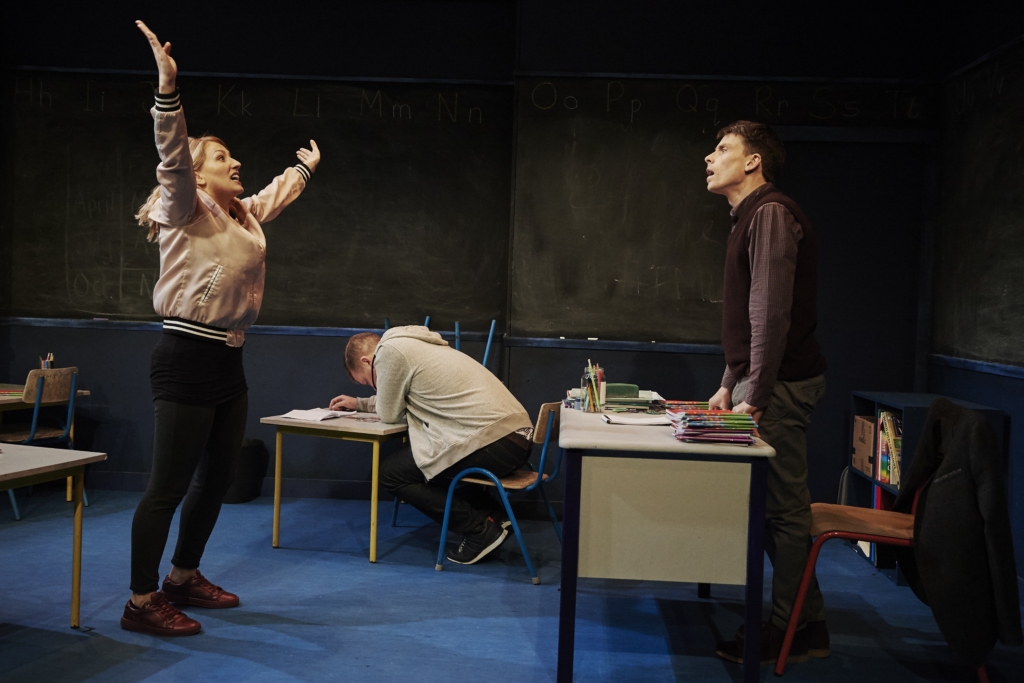 Having received rave reviews and standing ovations wherever it plays, CLASS by Iseult Golden and David Horan, presented by Verdant Productions, is going on tour across Ireland due to phenomenal demand.

Written and Directed by Iseult Golden and David Horan, the cast features Stephen Jones (Maz and Bricks, Stones in his Pockets, I, Keano, Dublin Oldschool, From Eden, Ripper Street, Damo & Ivor, Love/Hate) as Brian Costello, Sarah Morris as Donna Costello (Best Actress at The Irish Times Theatre Awards for The Lost O’Casey, Tina’s Idea of Fun, The Bells Of, Lady Play) and Will O’Connell as Ray McCafferty (Amnon and Tamar, A Season in Hell, No Worst There Is None Swansong, Life Is A Dream, Julius Caesar).

A parent-teacher meeting goes very wrong in CLASS – a new play about learning difficulties: in school, in life, wherever.

So are they going to trust this one? And should they?

CLASS is an explosive triple confrontation in a classroom over learning difficulties, love and entitlement. Funny, heartbreaking and beautifully observed, with rave reviews and a sold-out run at the Abbey Theatre, CLASS is new Irish writing at its finest.

CLASS was the hit of the Dublin Theatre Festival 2017, before being invited to play on the Peacock Stage at the Abbey Theatre in January 2018 and transferring to the Galway International Arts Festival and the Traverse Edinburgh Fringe in the Summer of 2018 – where it was an Edinburgh Fringe First Winner. The show always has an extraordinary response from both audiences and critics alike, and sold out before opening in both Dublin and Galway.

From November 5th 2019 CLASS is going on a full nationwide tour, with dates announced for Waterford, Portlaoise, Virginia, Carlow, Belfast, Drogheda, Navan and Naas along with a host of Dublin dates including Ballymun, Dún Laoghaire, Tallaght and Blanchardstown.

Supported by The Arts Coumcil

★★★★ The Guardian ‘A parent-teacher meeting becomes a microcosm for privilege and exclusion in a subtle, well-acted three-hander’

★★★★ The Scotsman ‘brilliantly performed…burns itself on the mind as an utterly credible, humorous yet heartbroken snapshot’

★★★★  Edinburgh Festivals Magazine ‘This script has layers upon layers… with an accomplished and expressive trio of performers’.

★★★★  The Wee Review ‘An exceptional piece of theatre’

★★★★ The Scotsman ‘Out of this outwardly simple situation, Golden and Horan weave a passionate 21st century tragedy’

★★★★★ SUNDAY TIMES ‘With an outstanding cast, a laugh-out-loud yet gut-wrenching story this thoroughly enjoyable show reflects our fractured zeitgeist brilliantly.’

★★★★ THE IRISH TIMES  ‘hugely entertaining and immaculately performed scenes from a school room… It is a rare, successful narrative about nice people’ 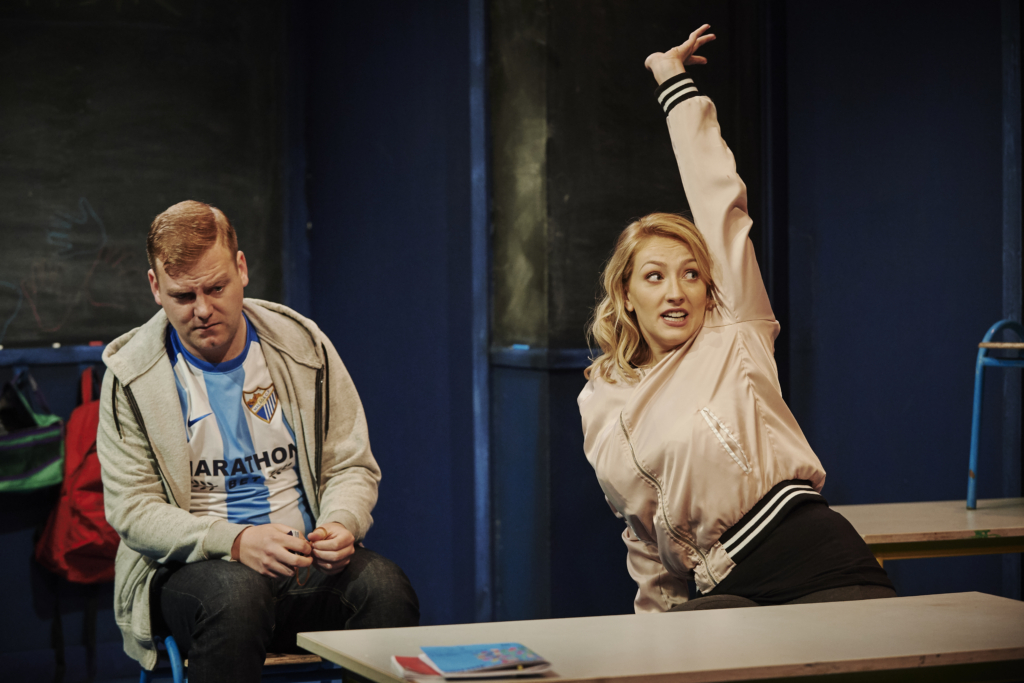